Yesterday’s blog post — “Does Government Funding Destroy Philanthropy” — was about the University of Notre Dame’s “Science of Generosity” initiative and the concept of “Crowding Out” when it comes to government funding and its effect on non-profit organization’s resource development programs. Since I posed more questions than I stated opinions, I’ve had this topic on my mind for the last 24 hours and engaged a number of people in this discussion. Not surprisingly, I’ve also been combing through the internet looking for some answers. Here is what the question boils down to :

Does accepting government funding impact a non-profit organization’s resource development program because: a) donors don’t see the need to contribute to an agency that appears to have adequate resource via federal, state or local government grants OR b) non-profit staff and board volunteers relax their efforts once these dollars are added to their revenue budget?

Joshua Benton wrote a great post at the Nieman Journalism Lab blog that examined this question by looking at a study done by Jame Andreoni and A. Abigail Payne.  Joshua Benton did a great job boiling it all down when he wrote this:

At first, I read this and thought . . . “Oh, the return on investment is still on the positive side and not something non-profits should worry about.” However, after thinking about it for two seconds, I believe non-profits SHOULD BE concerned.

I believe non-profit folks need to think about it this way: 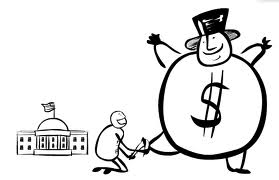 The bottom line is that non-profits cannot blame donors for the position they’re in today . . . many non-profit professionals and board volunteers took their foot off the accelerator and eased up on their fundraising efforts.

While assigning fault and blame is a common human reaction, the better question is what should non-profits who find themselves in this position start doing today if they want to survive this current economic downturn and the impact associated with shrinking government funding? Here are just a few of my thoughts:

I believe government funding is damaging to your non-profit mission and suggest you get out of it as soon as possible. If you want help, you know how to get a hold of me.    😉

Have you done an analysis of your non-profit organization’s government funding trends and compared it to your investment in fundraising efforts and systems? If so, what do you see? What is the state of your government funding? Do you feel comfortable with where you are or do you have that infamous “knot in your stomach”? Where are you steering your agency’s resource development efforts as you look ahead to the next 3-years?

Please share your thoughts to one or more of these questions by using the comment box found below. We can all learn from each other!

Here is to your health!