← What will Trump’s impact be on the non-profit sector?
Will your non-profit be a ‘winner’ or ‘loser’ during Trump era? →

How is Trump ushering in renaissance for non-profit sector?

Yesterday, I published a post titled “What will Trump’s impact be on the non-profit sector?” and I ended with a cliffhanger with the following tease:

“The Trump Administration will mark the beginning of a renaissance for the non-profit sector!“

If you didn’t have a chance to read yesterday’s post, I encourage you to go back and do so. It wasn’t very long, but it helps set the stage for what you’re about to read.

As I explained yesterday, I had written a blog post a few days after the election about what Donald Trump’s election might mean to the non-profit sector. However, a funny thing happened on my way to clicking the “publish” button . . . my inner Jiminy Cricket started chirping. While I normally ignore my intuition because I don’t trust it, I’ve been working on developing this inferior function (yes, this is a geeky Myers-Briggs reference … LOL) over the last five years. And I think it paid off in this case.

In the days and weeks after the election, I started to sense a “drip-drip-drip” of non-profit news coverage. There were random stories in my Google feed in addition to what I heard on the radio and saw on television. Again, I didn’t put the bigger picture together right away, but it did give me pause and kept me away from my blog’s dreaded “publish” button.

Here are a few examples of the “drip-drip-drip” I was seeing:

At first I kind of dismissed this as something I would describe as: “My-Liberal-Friends-Are-Rallying-The-Troops” phenomenon. Of course, you are thinking the same thing, right? It must be because the headlines are full of non-profits that seen as “liberal causes” such as: 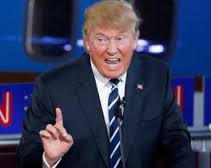 Take a good look up and down this list. It is way to easy to buy into an explanation like “My-Liberal-Friends-Are-Rallying-The-Troops” phenomenon.” Right? And I almost did, but Jiminy Cricket was still wagging his finger at me (or maybe it was Trump). So, I held off on publishing my Trump blog post for a little longer.

I was at Bloomerang‘s Bloomcon conference in Orlando, FL on February 13, 2017. One of the many expert speakers that day was Tom Ahern. (He is one of my all-time FAVs) And he was on his favorite soapbox talking about his favorite things:

My ah-ha moment came to me like bricks falling from the sky. It occurred while Tom was waxing poetic about great non-profit stories having “good guys” and “bad guys.” And this is when things started making sense:

So, put a check mark in the “Good Storytelling Material” box.

But what about the emotions at play in these donors’ philanthropic decisions? (hint: go back up to the bullet point where I list Tom’s favorite seven emotional triggers and quickly refresh your memory)

The following is what I believe is driving this wave of engaged donors:

These three emotions are all powerful in and of themselves. However, there is synergy between these emotions, which I believe exponentially took people to a new place (I prefer to think of it as a philanthropic place set in technicolor).

For those readers, who are excited because it sounds like I am saying that fundraising is as easy as saying: “BOO! Donald Trump is President so won’t you please give to my organization?” . . . I encourage you to think again.

But, oh snap, look at the time. It is getting late. <yawn> And I am way past my maximum word count guideline. I guess you’ll need to come back tomorrow for another installment of this series of Trump-inspired posts. But I guess it is only fair to give you a little preview:

Don’t worry. If your organization falls into the “fat and sassy government funding” category I just described, I’ll have a few tips for you tomorrow (or maybe the next day).   😉

← What will Trump’s impact be on the non-profit sector?
Will your non-profit be a ‘winner’ or ‘loser’ during Trump era? →